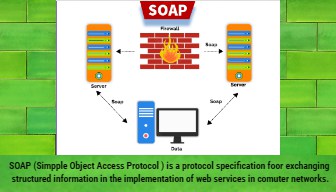 SOAP Full Form is Simple Object Access Protocol. SOAP is a specified protocol that is used to exchange various structured information related to the web services within a computer network. It was designed in 1998. Mohsen Al-Ghosein, Dave winter, Bob Atkinson, and Don Box designed this object access protocol for Microsoft.

Its submission to IETF ( Internet Engineering Task Force ) was made on 13th September, 1999. After that, it became available for use. XML Infoset is used in its message format. The transmission and negotiation of messages are dependent on various other protocols related to application layer.

HTTP ( Hypertext Transfer Protocol ) and SMTP ( Simple Mail Transfer Protocol ) are most notable among these protocols. The extensibility of SOAP allows it to ensure the development of WS-routing and security. Its neutrality ensures that it can operate through the use of any type of transfer protocol. The independence of SOAP allows it to use and operate various kinds of programming models.

An application can make use of SOAP to send a request to a web server, The request should contain certain parameters. Then the server sends a response back to the SOAP. The response contains data in a document formatted by XML. The data comes in such a format that is machine-parsable and also standardized. The operation of a SOAP message is processed by various SOAP nodes namely SOAP sender, SOAP receiver, SOAP message path, SOAP originator, SOAP intermediary, and ultimate SOAP receiver.