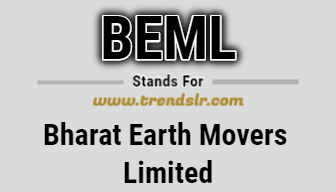 BEML Full Form is Bharat Earth Movers Limited. BEML refers to a Public Sector Undertaking which is headquartered in Bangalore, India. BEML is engaged in the manufacture of heavy equipment such as those used for transporting, mining and earth moving. BEML came into existence in the year 1964 when it was incorporated. It started its commercial operations in the year 1965. Until the year 1992, the company was entirely owned and operated by Ministry of Defence, India however, eventually the government divested 25 percent of its holdings in BEML.

Presently, BEML is the second largest producer of earth-moving equipment in Asia and controls 70 percent of the Indian market. It is listed on the National Stock Exchange of India as BEML and as 500048 on the Bombay Stock Exchange. BEML has installed manufacturing plants in Bengaluru, Mysore, Palakkad, and Kolar Gold Fields. It has several regional offices across the country. KGF is the primary unit installed for the manufacture and assembly of a various earth moving equipment such as Excavators and Bulldozers. The Bangalore complex manufacturers Rail coaches and the Mysore Facility manufacturers engines and dump trucks.