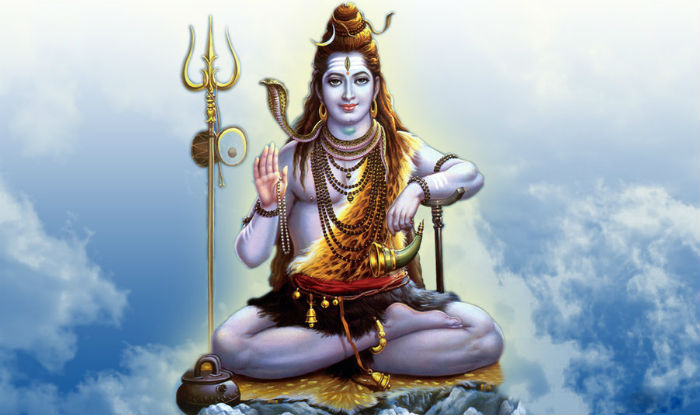 Lord Shiva is the representation of the Supreme Being and the third element in the Hindu Trinity. The other two members are Lord Brahma and Lord Vishnu. Lord Shiva is known as the creator, destroyer and preserver of the universe.
This cycle of destruction and recreation is always in a circle. Whenever evil tries to take prominence over good Lord Shiva dissolves the universe and starts all over again.Lord Shiva is known as the God of mercy and kindness. He protects his devotees from all evil that are always around us. He blesses his followers with grace, knowledge and peace. Here are the important symbols that depict Lord Shiva. Each of his depiction signifies a different aspect of his supreme being.

The unclad body covered with ashes: this form of Lord Shiva depicts his otherworldly image. This image means that the complete universe gives forth from him. But lord Shiva’s presence is much higher than this physical phenomenon.

Tangled locks: the three matted locks on the head of Lord Shiva convey the balance between the physical, mental and spiritual world and channel all the energy in one direction.

Ganga: Ganga is symbolically present on the head of Lord Shiva by a female who is Mother Ganga. Ganga holds much prominence in Hindu mythology and is the most sacred river of the Hindus. It is believed that if a person bathes in river Ganga following all the rituals on an auspicious day that person will be freed from all sins and will attain salvation. The symbolic reference of this river is shown on the head of Lord Shiva and states that the jet of water that comes out from the mouth of Mother Ganga and falls to the ground will destroy all sin and ignorance from the world.

The crescent moon: this symbol on Lord Shiva’s head signifies the cycle of time, which is depicted, by the fading cycle of the moon.

Three eyes: Lord Shiva is known as the three eyed Lord or Tryambaka Deva. The sun is his right eye, the moon left and the fire the third. The two eyes on his face reflects his activity in the physical world and the third eye in the center of the forehead indicates his supreme knowledge and wisdom. The third eye can search evil from anywhere and destroys it completely.

Half-open eyes: the half open eyes show that the universes cycle in process. When the eyes are completely closed it signifies the dissolvement of the universe and when it is completely open a new cycle of creation begins.

Snake around the neck: the snakes symbolize the yogic powers of Lord Shiva. Like a sage, a snake holds nothing, builds nothing and can live on air for a long time and is found in mountains and forests. The snake curled three times around the neck of Lord Shiva depicts the past, present and future time. The snake looking in the right direction of Lord Shiva signifies that the Lord’s perpetual laws of reason and justice preserve natural order in the universe.

Rudraksha necklace: Rudra is the other name of Shiva. It also means “strict or uncompromising” and aksha means “eye.” Rudraksha the necklace worn by Lord Shiva shows that he is firm about his cosmic laws and to maintain law and order in the universe. The necklace has 108 beads, which symbolize the elements used in the creation of the world.

Damaru (drum): a small drum with two sides alienated from each other by a thin neck-like structure represents the two utterly different states of existence, unclear and clear. When a damaru is shaken, the sound formed denotes Nada, the cosmic sound of AUM, which can be heard during deep meditation.

Nandi: the bull is related with Shiva and is said to be His vehicle. The bull represents both power and ignorance. Lord Shiva’s use of the bull as his vehicle expresses the idea that He removes ignorance and bequeaths power of wisdom on His followers.

Tiger skin: a tiger skin denotes impending energy. Lord Shiva, sitting on or wearing a tiger skin, shows that He is the source of the creative energy that remains in potential form during the suspension state of the universe.