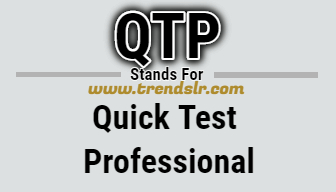 QTP Full Form is Quick Test Professional. QTP is a product from the Hewlett Packard (abbreviated as HP). It is a tool useful in the smooth performance of automated functional testing without oversight once the development of script is finished. QTP makes use of Visual Basic Scripting (abbreviated as VBScript) for the purpose of automating the applications. The scripting engine is not required to be installed as it comes with the Windows Operating System. The present version of VBScript is 5.8 that is provided as part of Win 7. It is to be noted that VBScript is an object-based language, not an object-oriented language.

QTP is essentially a Functional Testing Tool that is best suited for the purpose of regression testing of applications. QTP is a commercial or licenced tool that is presently extensively popular. It compares the expected and actual result and gives a report of the execution summary’s result. QTP was originally a product of Mercury Interactive but was later acquired by Hewlett-Packard. Its previous name was Astra Quick test later renamed as Quick test Professional. However, the present version is called the Unified Functional Tester (abbreviated as UFT).

The advantages of QTP are multi-fold such as ease of navigation, easy to use, Report generation, easily integrated with Test Management Tool that allows easy monitoring and scheduling, usability in Mobile Application testing, etc. The disadvantages of using QTP include its limitation to Windows operating system, the high cost of licensing, incompatibility with a few notable browsers, high execution time since it puts a heavy load on RAM and CPU. The first version was released in May 1998 and continued till 2001 and the latest version of the same was released under the name Hp-Unified Functional Testing in the year 2012.