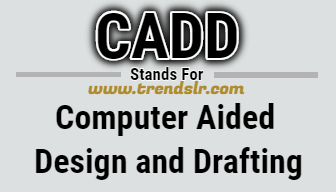 CADD Full Form is Computer Aided Design and Drafting. CADD is basically the application of computer systems for aiding the creation, analysis, optimization, modification of a design and for increasing the designer’s productivity, design’s quality, creation of a database for the purpose of manufacturing, and improving communications. The CADD output is generally in the form of electronic files for the purpose of machining, print, or other related manufacturing operations. Its application in the designing of electronic systems is called Electronic Design Automation (abbreviated as EDA).

In mechanical designing, it is called Mechanical Design Automation (abbreviated as MDA) which includes the process relating to the creation of a technical drawing with the help of computer software. A CADD software for the creation of mechanical design may generate raster graphics reflecting the overall appearance of the designed objects or vector graphics for the depiction of the objects of traditional drafting. However, CADD involves not only just shapes. In the drafting of engineering and technical drawings, the output of CADD should convey information like processes, materials, tolerances, and dimensions as per application-specific conventions.

CADD may also be used in the design of figures and curves in 2D space or surfaces, solids, and curves in 3D space. It is a crucial industrial art used in several applications including shipbuilding, aerospace, and automotive industries, prosthetics, and architectural and industrial design. It is widely made use of in the production of computer animation for the purposes of special effects in the entertainment world. When used in movies for such purpose, it is known as DCC digital content creation. It has remained a major driving force in research relating to computer graphics, computational geometry, and discrete differential geometry.