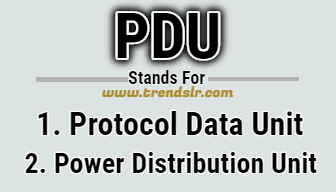 PDU represents a unit of data that is specified in the protocol of a given layer in a layered system consisting user data as well as protocol control information. PDU is an important term related to the four layers of the OSI model. Layer 1, PDU is a bit (symbol), Layer 2 it is a frame, Layer 3 it is a packet and Layer 4 it is a segment. PDU has four fields; (1) Source service access point, (2) The destination services access point, (3) Information field& (4) Control field.

PDU is the structured information that is passed to a matching protocol layer that allows the layer to deliver its function or service efficiently. When PDU passes over from the layer that constructed it to the layer that only delivers it becomes a service data unit to that layer. A single-letter prefix is added to PDU to understand different layers (i.e.,LPDU – for the data link layer, NPDU for the network layer& TPDU for the transport layer).

Full Form of PDU stands for Power Distribution Unit. A power distribution unit or commonly termed as mains distribution unit is an equipment fixed with a number of outputs that are designed to distribute electric power to various electronic resources. This includes series of computers, servers and networking equipment within a data center.

A data center has to face several problems when it comes to safeguard power management. Hence, data centers depend upon PDU monitoring to maximize the uptime, improve the efficiency and scale the growth. PDU works as a central unit that controls and distributes electric power evenly in a data center.It has multiple sources of integrated power outputs. Each power output is connected to a data center, server or network directly.

The basic PDU is designed for standard outlets with no monitoring and remote control access. The rack-mounted & floor-mounted PDUs are more reliable and sophisticated & provide data to calculate PUCE (Power Usage Effectiveness). A PDU can manage and distribute larger amounts of energy as compared to a normal power strip and accordingly provides electrical power to multiple equipment racks. A rack-mountable PDU mounts directly to the rack and controls as well as monitors power to specific network servers and other devices in the data center.

It also helps in maintaining a balanced power supper thereby increasing the life of the equipment. A floor-mounted PDU provides an important management bridge between the source of power and various equipment racks within network operations center (NOC) or a data center. PDUs can be controlled and accessed over the network. PDUs with multiple functions like power filtering, load balancing, and remote monitoring, etc. that improves the quality of power supply are available in the market.