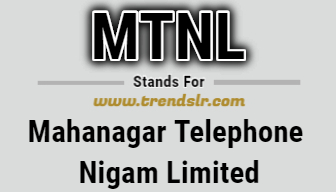 MTNL Full Form is Mahanagar Telephone Nigam Limited. MTNL is a telecommunications service provider, which is state-owned and operational in metro cities of India, namely New Delhi and Mumbai. It also operates in Mauritius in Africa. The company used to have a monopoly in New Delhi and Mumbai until the year 1992 when the telecom industry opened to private players. The motto of the company is “Transparency makes us different”. The Government of India presently holds 100 percent stake in the company. Due to rise in the competition and corruption prevalent in the Indian Telecom sector, the company has been suffering great losses in revenue and market share.

Bombay Telephone was established in the year 1882 and conducted the first telephone exchange on January 28, 1882. The first telephone system in Delhi was founded in the year 1911. In the year 1986, the Government of India founded the Mahanagar Telephone Nigam to monitor the provision of telephone services in Mumbai and Delhi. Ever since then, the company has expanded and tried to fight off the rigorous competition by private players. MTLNL provides WLL and fixed line telephones services in the country. It additionally provides various mobile services on CDMA and GSM platforms.

It operates in the form of various brands, namely: Dolphin, which is a post-paid GSM service providing Value-Added Services (abbreviated as VAS) such as 3G; Trump, which is a prepaid GSM service; and Garuda, which is essentially a WLL service providing a Mobile tariff and an FW tariff.  MTNL started offering 3G services in the country under the name “MTNL 3G Jadoo”. Services included mobile TV, video calling, mobile broadband with faster data connectivity from December 11, 2008. It was MTNL which came up with Blackberry solutions by announcing the first 3G enabled Blackberry Bold devices.

Presently, MTNL is the biggest Internet Service Provider in Delhi and Mumbai and the third biggest in India. It started offering fibre-to-the-home (abbreviated as FTTH) triple play services in the year 2011, which allowed services such as interactive gaming, video conferencing, video on demand, and other services. Despite losing a lot of revenue every year, the company has remarkably improved its services and has incorporated provision of services such as VOIP, VPN, and leased lines through VSNL and BSNL.