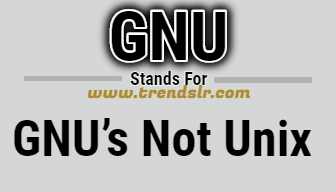 GNU Full Form is GNU’s Not Unix. GNU is a computer operating system which is similar to Unix. It is pronounced as ‘guh-noo’. It was developed by Free Software Foundation – GNU Project. The GNU project was started by Richard Stallman in 1984. GNU is free software which is totally compatible with Unix. Though it is so much similar to Unix, it is different in being free software with no Unix code. (That’s the reason it is named as GNU’s Not Unix).

Linux systems heavily rely on GNU software. Earlier, GNU used Linux Kernel. Hence, most often GNU was confused with GNU. The concept of ‘free software system’ makes users take control of their computing. In non-free software, the software developers have all the copyrights. This free software gives the freedom to copy, run, study, distribute, or even make improvements to the software.