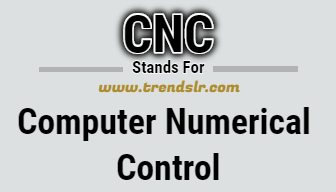 CNC Full Form is Computer Numerical Control. CNC refers to the process in which computers are used to control machineries and tools in manufacturing units. The modern CNC systems enable component designing through end-to-end automation by using CAD or Computer Aided Design. CNC allows manufacturers to fabricate various parts quickly and accurately. There are also several hobby CNC machines which are domestically used. Some of the common CNC machines include lathes, grinders, and milling machines. The software code to program CNC is generally termed as G-Codes and M-Codes. CNC has considerably evolved every since their introduction in the manufacturing industry. Earlier models did not facilitate altering in programs whereas; the latest models can be controlled by software files through USB, CDs, or files transferred over networks.

Full Form of CNC is College of New Caledonia. CNC is a post-secondary academic institution, which provides service to those who are residents of the British Columbia’s Central Interior. This particular region has an approximate population of 145k and covers three school districts, namely: Nechako Lakes, Prince George, and Quesnel. The institute presently has six operational campuses situated in Burns Lake, Prince George, Vanderhoof, Mackenzie, Quesnel, and Fort St. James. It currently provides small-sized classes, which does not go beyond 37 students, since it is the mandate of their faculty agreement. The CNC follows annual system-wide enrollment of about 5000 students in areas such as university studies, continuing education, career access, trades and health sciences.

The CNC was founded in the year 1969 and was the B.C. Vocational School’s successor. It was given the name “the New Caledonia”, a name that was given by Simon Fraser, an early explorer. In the year 1971, the first convocation of the college happened which witnessed the graduation of 37 students. Ever since then, the institute has expanded and grown more popular among people as an institute promising education par excellence. In the year 1996, the CNC’s Arms, Flags, Supporters, and Badge were formally registered with the Canadian Heraldic Authority.