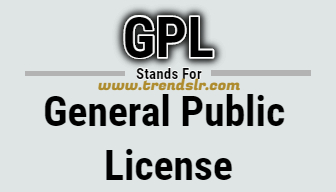 GPL Full Form is General Public License. The free license related to software that gives the end users like companies, organizations, and individuals the right to modify, execute and share the software, is called GPL or General Public License. The software that gives this license is called free software. Richard Stallman originally wrote this license for the GNU Project. Thus, due to GPL, a computer program’s recipient obtains the rights related to the Free Software Definition. For ensuring the preservation of freedom, the copy-left is utilized during the distribution of the work. This also holds true when the work is added to or altered. The license terms under which the derived work is distributed must be same. This makes the GPL a copy-left license.

The fact stated above makes GPL different from the permissive free licenses of software. Some of the examples of the latter are the MIT License and BSD licenses. The significant free software programs that have the GPL license are the GCC or the GNU Compiler Collection and the Linux Kernel. Under numerous licenses, some free Softwares are dual licensed. The most prominent example of such software program is MySQL, in which the dual licenses include the GPL.

In the domain of FOSS, one of the most well-known licenses for software is GPL. According to David Wheeler, the copyleft conditions offered by the GPL played a major role in the success of systems based on Linux. It also gave assurance to those who made a significant contribution to the kernel, that their work will remain free, and will provide advantages to the entire world. This helps by preventing the exploitation of their work by the software companies that do not contribute back to the Linux Community.