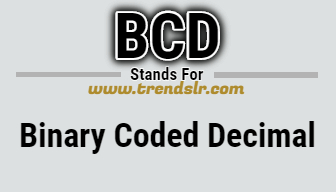 BCD Full Form is Binary Coded Decimal. BCD is a term used quite extensively in electronic and computer systems. The term refers to a category of binary encodings comprising decimal numbers in which every decimal digit is reflected by a fixed number of bits (which are generally four or eight in number). Special bit patterns are often used as signs or in the form of other indications. In byte-oriented systems, which for example are found in most modern computers, the term known as unpacked BCD is used which implies a full byte for every byte.

A packed BCD generally encodes 2 decimal digits in single byte by taking benefit of the fact that 4 bits are sufficient to represent the range of 0 to 9.The exact 4-bit encoding may have variations for various technical reasons. The 10 states which represent a BCD decimal digit are occasionally known as tetrads with a pseudo-decimal digit. The main virtue of a BCD is in its accurate representation as well as rounding quantities. Its ease of conversion into representations that are human-readable is also another asset.

The main drawbacks of BCD involve a minute increase in the circuits’ complexity required for the purposes of implementing basic arithmetic and less dense storage. BCD has been used in several early decimal computers. It is implemented in a machine’s instruction set such as Digital VAX and the IBM System/360 series. BCD per se is not largely used and is no longer implemented in the instruction sets of computers, nevertheless floating point and decimal fixed point are still relevant and continue to be applied in commercial, financial, industrial computing in cases where there are fractional rounding and conversion errors that are intrinsic to the floating point binary representations and cannot be withstood.